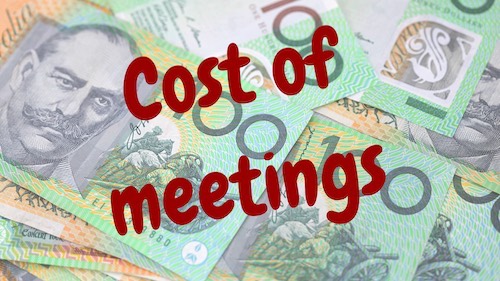 Wouldn’t it be great if all the time and energy you spent in meetings earned interest just like the money in your bank account? One of the most overlooked costs of meetings is the actual cost of time.

Hey, that’s a stab in the dark and very simplistic, but did I get your attention? This doesn’t even take into account the amount of time it takes to prepare for each meeting.

If I could change one thing for your business, it’s for you to generate the same results in less time. Imagine how much other work you could get done with the extra time you’ll have up your sleeve.

No-one said, ever, “Fantastic! Another meeting!”

Let me give you a real example. A small organisation I worked with had 5 people who met each week for 90 minutes. They were all professionals on good incomes. The leader did not think they could reduce their meetings and that my prediction of half the time and double the results were fanciful.

So here’s what we did.

The result? They’ve now reduced to meeting once every 3 weeks for 45 minutes each time, with more results.

How was this possible? As it became more focussed, there was no unnecessary discussion. The attendees got straight into it. Latecomers and excuse-makers stepped up and arrived early for the meeting, as they could see it had clearer focus.

My prediction came true once the Meetings Manifesto was put in place.

That’s a big difference to your bottom line.

If you’d like to flick the switch on your meetings, call me. I’d love to chat.